Those awesome German words you always see on the lists of the “coolest literally translated German compound nouns” aren’t actually all that cool or even unique to German. In fact, English does the exact same thing a lot of the time. Here are a few examples of words that people have been showing online as “words that are better in German than they are in English” and they are WRONG!

Get a copy of the video script along with a worksheet to help you practice forming your own compound nouns here.

While this word is entertaining in German, it is more entertaining in English, but no one seems to realize it. The English word “skunk” is a combination of two Proto-Algonquian words, which I will now butcher the pronunciation of */šek-/ “to urinate” + */-a:kw/ “fox.” became */šeka:kwa/ which eventually turned into the word we now know as skunk, so while the Germans may call this a stink animal, we English speakers call it a urinating fox.

The German word for hippopotamus seems to imply that hippos are just fat horses that live in water. The English word hippopotamus comes from the Latin word hippos, “horse” and the adjective of the word for “river or rushing water”, potamos. So even in English a hippo is a horse of the river. Again, the German and English are exactly the same.

This one fascinates me, because I recognize this similarity immediately when I hear the word porcupine. It is pork, i.e. comes from a pig and pine, which sounds like a spine, which is another older word for a spike or prickle. The English word again comes from the Latin, which is “porcus”, pig and “spina”, thorn. In English it is a thorny pig and in German it is a pig with spikes.

This one often gets mentioned, because there are a lot of German words for animals that have either pig or bear as their base and then some adjective that describes the bear or pig. In this case, we have a bear that washes (more specifically it refers to the raccoon’s habit of washing his food before he eats it). In English the word we use is raccoon. It comes from the Algonquian word arahkun, which is in turn derived from the word arahkunem meaning “he scratches with his hands”. It refers to the same practice as the German does, but we don’t recognize it as easily, because English uses other roots for its words rather than using the English words to make a combination. Which is cooler, a bear that washes his food or an animal that scratches his food?

In German this is an animal that has a belt around it, which refers to the hard outer shell of the armadillo. The English word is without a doubt cooler this time. It comes from a combination of the Spanish word armad(o) armed and the Latin diminutive suffix -illo. This means that the English speakers call this animal a little armored animal, while the Germans just think it is wearing a belt.

In this version, English is more accurate. The German version indicates that it is a worm that glows. In English we call it a firefly. This draws upon both important parts of this insect. It looks like it is on fire and it flies. The German version seems to think that they can’t fly, which would be cool to see a bunch of worms crawling around blinking, but that isn’t what is happening. To the German word’s credit, however, it is more accurate to say that they are glowing than it is to say they are on fire.

This word is often listed as a funny German word, because it describes what it is, but the English word diarrhea is exactly the same. It was coined by the Greek physician Hippocrates and is just Greek for “a flowing through”. Seems like the same thing to me.

Lots of German words that end with -zeug make it onto lists like this. Flugzeug is usually the first one people gravitate towards. It is a thing and it flies. Let’s call it a flight thing. Sure, but the English is basically the same, but slightly more convoluted. The word “airplane” was originally spelled “aeroplane”, but whether it is spelled “air” or “aero” the meaning is the same. It is in the air. The word plane is an old French word which was used to refer to birds that weren’t flapping their wings. This is most closely related to the English word to float or glide and is used to describe a thing that floats or glides. So in English it is a floating or gliding thing that goes in the air. To simplify it further, the English is a flat object that floats through the air.

Speaking of words that end with -zeug, this one is definitely the dumbest on the list. The word “automobile” is a thing that is mobile and uses its own power (that’s what the “auto” part means). If you choose the translation “car”, it has several different origin theories, but they all basically mean the same. French carre – wheeled chariot Latin carrus – chariot Gaulish karros – cart, wagon, Proto Indo European kers – to run It is a thing that has wheels and runs, meaning it uses energy within itself to move.

Literally a combination of the word “mother” and “cake”. While some people do eat it, which I find incredibly gross, the English word isn’t far off. The word “placenta” comes from the same word in Latin, which literally translates as “cake”. While the word “mother” might be missing from the English, the implication is pretty gross for both versions.

Another case of people not understanding the origins of a word. This comes from the French “(hôpital) ambulant”, which means “walking (hospital)”. I like the imagery in the English version better, but the German does have a certain appeal to it.

So the next time you see someone put up a list of words that are better in German than they are in English, tell them their naivety has gone far enough. English can be cool, too. The more you know about a language, the more you will come to appreciate the little nuances of the language.

Admittedly, Herr Antrim does think that some nouns have cool literal translations in German. This is why last week he made a video about awesome German words. This post is just a gentle reminder that not everything sucks in English. 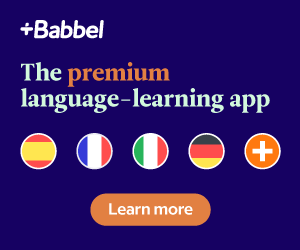